More on the 2nd Dimensional Paradigm

The 2nd Dimension focuses on developing your situational awareness to such a level that you are able to identify potentially dangerous people and situations and thus stay away from them.

The 2nd Dimensional Paradigm is an expansion of the 1st DP. It acknowledges that there are instances where the best way to defeat your attacker is to avoid a physical confrontation in the first place. For example, if you realize that there are certain people who you cannot defeat with your 1st Dimensional skills, then you must avoid them in order to stay safe.

The underlying assumptions or “truths” that support the 2nd Dimensional Paradigm are as follows:

1. Self-defense involves a well defined “bad” attacker that wants to physically assaults you without justification.
2. The attacker is known to be “an attacker” because due to your execution of situational awareness, he can either be easily identified as “evil” before he initiates the physical assault.
3. Defeating the attacker is simply a matter of avoiding him.

The 2nd DP is an evolving viewpoint, but it is still harmonious with the 1st DP. Because, in the event that avoidance might fail or it is not possible to avoid the attacker, you can rely on your 1st Dimensional skills to defeat him.

Similar to the 1st DP, the popularity of the 2nd Dimensional Paradigm comes from its simplicity. You are good, the attacker is bad, and self-defense will always achieved upon execution of the proper techniques of situational awareness and/or physical skills. Self-defense begins with the identifying the potential attacker and ends with the attacker being avoided or defeated.

As with the 1st DP, this Paradigm is appealing because self-defense mastery is an obtainable goal. Not only can you learn to swim and thus not drown if you fall in the water, you can also avoid dangerous water in the first place.

Praise for the Blog

"In one article the guy articulates what I've been struggling to tell people for decades. It's a lot more complicated than what people want it to be." - Marc MacYoung
"This blog is brilliant. A must read."
"Last night I read a fantastic blog - The multidimensional paradigms of self defense by Erik Kondo."
"Very nice. I think this sentence sums up his intent nicely: 'The Multi Dimensional Paradigms of Self-Defense is a "map" for the journey of learning and applying self-defense.' I think he delivers very well."
Excellent Article!
"Erik - an insightful and impressive model you created. Excellently done"

Not everyone will like the Blog. That is the underlying point.

A Paradigm is a closed viewpoint. True Believers in their own paradigm must deny the existence or validity of other paradigms.

Even if their Paradigm has elements in common with other paradigms, True Believers will fight to defend the "rightousness" of their own viewpoint.

These expressions of conflicting opinions confirm the existence of the multiple paradigms.

If this description sounds like how different religious cults behave, IT IS.

Complaints about the Blog

"does the use of words like 'paradigm' and 'multi-dimension' really help with explanations?"

"I found it long winded, and basically stating the obvious."

"Does anyone else think it sounds like plain old common sense?"

"Can't say this diagram thing offers anything new at all."

What You Know Just Isn't So 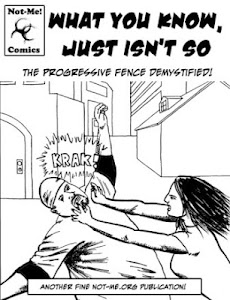 Some of My Other Blogs